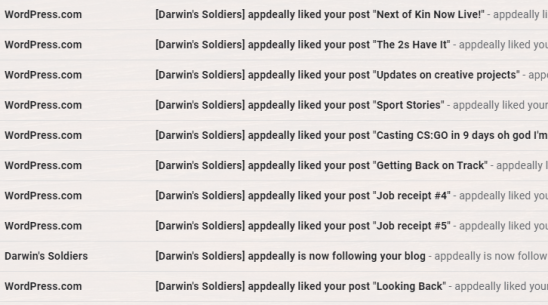 gamecool10 is no longer the only follower of this blog…except he is. Because Appeals is clearly a bot account trying to lure me into following back or acknowledging in some way. But I’m too wise for you, Appeals! I even let autocorrect change your username so your robo-detectors don’t perk up at this blog post and pay me any more attention.

(I wonder what gamecool10 is up to these days. I highly doubt he still reads this, and he flagged his blog private a long time ago so nobody could access it. Maybe he knows something I don’t.)

In other news, I’ve finally arrived in Portland and am currently in the process of setting up my room and gathering groceries. It’s cold and rainy, but not as cold as Ohio so I think I’m going to be okay. I’ve informed all relevant persons about my lack of a high-powered gaming desktop, which most notably means I can’t make VGFAQ videos for the time being. My #1 priority needs to be finding a job anyway.

Not much else to say. I love the room, it has its own bathroom which is a luxury I haven’t enjoyed since Ohio, almost five years ago. And the snow gives me an excuse for staying holed up and exercising on my exercycle instead of jogging or swimming at the local beach.

So we have, like, a follower now. Like, a real person. Who actually followed the blog. Apparently they get like an email or something every time I post. And this terrifies me. Somebody’s going to actually read this? Do I need to be more politically correct? Should I stop describing  all my criminal activity in gruesome detail and posting nude pictures of all my girlfriends and boyfriends I’ve had since September 2012? What are they even hoping to read? I don’t even know, but hopefully this is part of it.

Well, you nonexistent readers are now part of the 99%, and thanks to horizontal resentment I can rest assured that your ire will direct towards the 1% of existent readers and not myself, as the arguable person of power in this metaphor. So idgaf

Today we colored our brick into a bunch of different colors so the game doesn’t look like sad white chalk land. Then we dragged them into the world. Exciting and pretty basic stuff, but since I haven’t watched a video since April, I appreciate him going slow.

Oh, new announcement! So if you’ll recall, I promised myself to bike 20 minutes a day, and unlike my Unity daily goal I’ve been fucking golden at the biking one. The trick came when I discovered that shoutcasted competitive L4D2 matches existed on Youtube and are really fun, so now I watch one of those while on the bike and it’s awesome. To celebrate absolutely nothing we’re adding a third once-a-day to the ole repertoire, and its an embarrassing one so thank god a real person decided to join just in time…I’m going to draw something every day until I’m a not suck artist. It’s the hugest bottleneck in my game development (other than not owning HTML5 exporter for Clickteam Fusion) so Imma just keep doing it until I can do it kinda skillfully. Whatever drawing will be posted here because otherwise I won’t remember. So without further ado, Karl the Policeman. 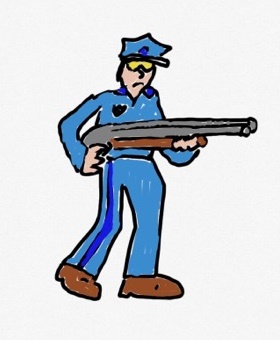