Just got my first writing job application that wants to move forward! Pixelberry has asked for a writing assessment to see if I can move onto the interview stage. This is super cool, and I’ve taken the day off school so I can fully focus on it. 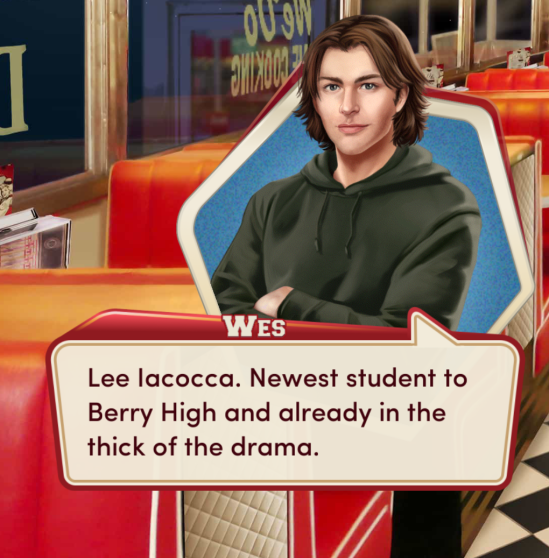 I like the artstyle, and I can definitely do this sort of writing, though I hope they assign me to the sci-fi/supernatural/fantasy/not-just-high-school settings. The “every good option is locked behind a premium currency” business model is super frustrating but I bet it makes a fortune

I’ve kinda taken everything else off too, just to send out job applications fulltime. I repurposed my old C++ learning story into an all-purpose story for working on things in the third-person, and it’s got a pretty cute spreadsheet tracking my job applications and their status. 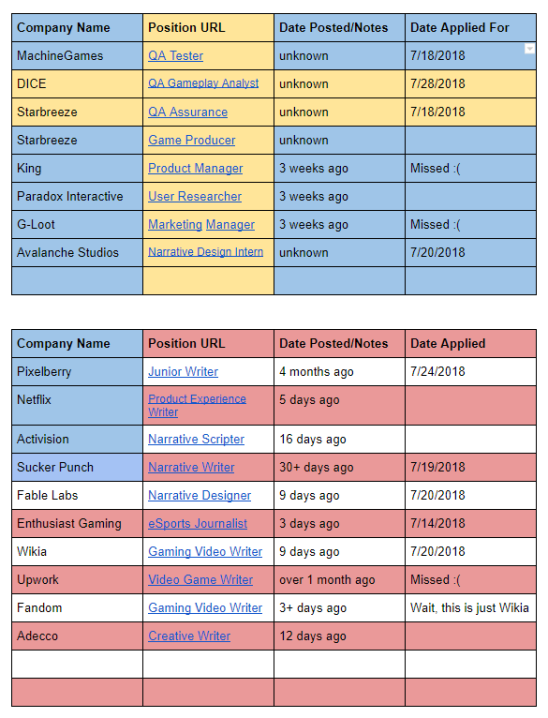 I’ve kinda let my YouTube channel fall by the wayside as I sort this stuff out, but it’ll be there when I get back. My viewers almost exclusively come from my reddit threads, so this might actually be a chance to test whether a brief hiatus even hurts my numbers. Itch.io’s been sitting barren since February, but I’m pretty happy with the game selection already on there tbh.

Just broke my 200th download on itch.io, which is genuinely cool. It warms my heart to check every few days and see a handful of people have downloaded stuff. Almost all of the hits are from TV Tropes, since I wrote full pages for Gamer 2, Find the Cure!, and Oedipus in my Inventory. Any of my future creative content will get its own page no questions asked, it’s great for building steady (if minor) traffic. My Clickteam Fusion tutorials and C++ Projects are steady hitmakers too, the latter of which I don’t really understand but I’m not complaining.

I can’t help but be a little worried overall. Literally no other job I’ve applied to has even written me a rejection letter, so if Pixelberry doesn’t work out I may not have a lot of options going forward. One safety net is that I’m in the running for their Senior Writer position, and if they say no, I can ask if there’s any chance I can downgrade to their Junior Writer position. I mean, you never know.

This might not be my most coherent blog post since I didn’t sleep last night, but at least I spent it being productive, right?

The first big thing that happened was that my article scored the second-to-top comment in a reddit thread dedicated to an insane play performed by the LA Gladiators during the Overwatch League playoffs. A blog called Daily eSports contacted me and asked if I wanted to start writing articles for them at a rate of $1 per 100 words. I agreed mostly because they said I’d get to work with an editor and use their SEO tools, two things I’ve been meaning to get more practice with, things that would teach me valuable skills to making my content marketable. It’s a little depressing because the SEO tools were like “please replace every single interesting word with the most generic synonym” and the readability tool was like “Every sentence over 20 words is too short”. I mean, I assume they’re right since they were literally designed to attract people, but I like my $10 vocab words ;~; But I’ve already written my first article for them, which is officially the first online article I’ve ever been paid to write.

I’ve been strongly considering making a Patreon for my YouTube channel, maybe start getting some pocket change for that pastime too. It’s still humming along, nothing but the Payday videos are getting hits but I expected that when I decided to invest into a single franchise. The only Fortnite video I’ve made is maintaining a steady climb of new viewers despite me phoning in marketing, so I’ll probably more of those. I decided to do my Fortnite vids with a Scottish accent just because I need some way to enjoy myself, the game itself certainly isn’t doing it. 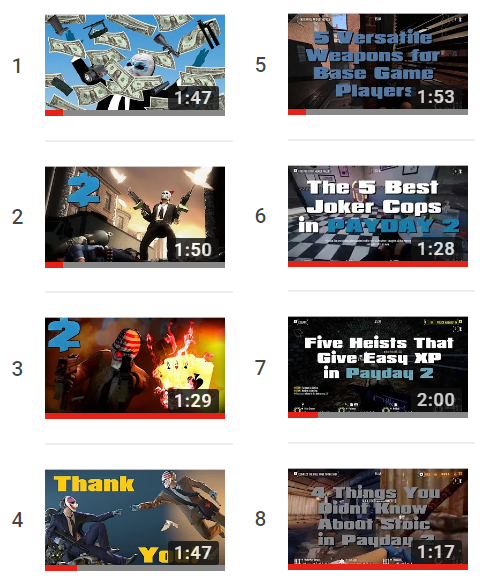 Look at how goddamn gorgeous those thumbnails on the left are. Sure, they’re not Rembrandt, but they actually qualify as YouTube-worthy thumbnail quality. I’ve finally finally started Photoshop, and I’ve recently passed the threshold where I know enough that it’s just fun and awesome and I look forward to making the thumbnail instead of dreading it. Photoshop is a goddamn miracle and it blows my mind what I’ve been able to accomplish with next to no effort. This makes me really happy because I’ve wanted to know Photoshop for years, but I’ve always put it off because the initial hurdle felt too daunting. That leaves Unity as the one looming beast I’ve never managed to tame. Have made no progress on that front.

Kinda related segue, my new school project is to make a Mixer game with 3 other students (Tyler from Zone Out, Akshay, and Wong). Mixer is Microsoft’s attempt to beat Twitch at their own game and, following their failure to do so, rebrand itself as the leading avenue for crowdplay games (the genre Twitch Plays Pokemon invented). To their credit, they have done a great job of that and there are a bunch of thriving crowdplay games on the channel. Our job is to make one more.

My job specifically is to write the design document and create a mockup in Clickteam Fusion for playtesting purposes. The design document is a work in progress and the school’s private Google Drive is a real twip about sharing stuff outside network, but you can see the mockup via this secret itch.io URL. That’s never going live anywhere else, so consider it a thanks for reading this blog. Hopefully it’s more user-friendly than Hurdles.

In one month, the Into the Black RP series will be celebrating its 5th anniversary! With thousands of posts and almost a dozen different authors, there are a lot of different characters and storylines filling our furry cyberpunk universe. While mainstays like Soren, Marita, Tony, Axel, and Emilena have had plenty of time to leave their mark on the world, I wanted to take this opportunity to celebrate some characters that may not be as well-remembered, but are no less the heroes of their own story. (Click on any image to enlarge)

The complete saga of Patrick Anderson

Who can forget Rocky’s contribution to the canon? He only posted three times, during which his character drove home, fell asleep, and started snoring. Luckily, after real-world days stretched into weeks without the author returning to wake his character up, the rest of the authors made good use of Patrick by detonating a brick of C4 in his bedside cabinet, to give the bad guys a much-needed victory.

As yeswonderful’s single-digit post-count might foreshadow, Kaien didn’t stick around very long either. Her author joined the 2nd RP while our heroes were trekking through the dangerous jungles of Bolivia. Kaien emerged from some bushes, asked the heroes why they were in Bolivia, and then bid them adieu and returned to the bush. Some say she’s still there to this day.  Personally, I say she was an ignored Grecian chorus, a messenger begging the authors to reflect on that whole nonsensical Bolivia plot and reboot the storyline before it went any further. If only we’d listened.

The only remnant of the late Winky Face. Gone but not forgotten

Not technically a character, but bestariana1girl nipped in once and posted a single emoji after learning she needed 50 posts to qualify for a forum member tag. nick22 quickly deleted it with his admin powers, but Winky will forever live on in Serris’ OOC.

Series regulars bushwacked and nick22 share co-author credit for Gittsun’s brief adventures. bushwacked wrote him as a random drunk who gets gunned down as flavor text during a shootout, but nick22’s characters rose to the occasion and heroically bandaged him up. bushwacked sportingly kept the character around, but he never really knew what to do with him, and Gittsun’s antics, speaking style and general uselessness annoyed everybody…a lot. Finally Pterano had enough, and Gittsun’s appearances ended as violently as they began.

bushwacked is responsible for this one too. Near the end of the RP, the heroes raid a Purifier factory to try and steal info on the location of the pulse bomb threatening to EMP the city. While searching, they ambush a Purifier hit squad and leave one hapless grunt alive for questioning. bushwacked played the out-of-his-league Felix as he begged for his life and gave the heroes all the info he knew. But since pacing was never our strong suit, the questioning continued on…and on…and Felix slowly slipped into reverse-Stockholm Syndrome until he was suicidally begging the heroes to kill him just so the plot could continue.

Felix’s swan song arrived when LettuceBacon&Tomato posted this. It was the final straw, and the heroes finally dropped Felix off a catwalk and continued the storyline.

And those were just the characters that actually appeared in the RPs! We’ve also got some honorable mentions who never even made the leap from the discussion threads. Put your hands together for these unsung heroes:

Belmont2500 already held the record for fewest posts of any author in the Darwin’s Soldiers canon, but he outdid himself when Hania Enapay never progressed beyond this bare-bones character sheet. Belmont’s phrasing makes it sound like there are other RPs the character has appeared in but I don’t actually care enough to go check.

Forum newbie Alien Ant Farm joined shortly after Belmont, posting a police chief for a city that he’d just made up. Then he was almost immediately banned from the forum for unrelated violations. At least Chief Joseph got that retirement he wanted so badly.

But it’s not just one-hit-authors whose creations couldn’t quite reach the silver screen! Serris made Into the Black history by posting Dolly, a gene therapy pioneer who doesn’t survive her own character sheet. LettuceBacon&Tomato’s character Karl took a similar bullet for the plot in the Racing the Storm discussion section. At least they’re in good company.

And, last but not least…

Flora, the futa fuchsia folf, was popular among a certain caste of authors. She got a bunch of side stories and even her own spinoff RP where she (and some of nick and Starfall’s characters) could do sexy things while the rest of us were RPing dark and gritty high-octane cyberpunk. But something I never told anyone else was that she had at least one fan who never posted in the RPs or even made a forum account. It was a guy that messaged me and offered to pay me for a private RP with Flora and his OC, an immortal Snivy diety named Life.

And I can’t think of any worse way to end this article than with a link to it. Happy 5 years, Into the Black universe, god only knows where you’ll be in five more!